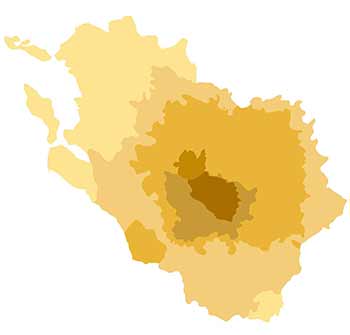 The Cognac Delimited Region is located at the north of the Aquitaine basin, bordering the Atlantic Ocean. To the West, it borders the Gironde estuary and the islands of Ré and Oléron and to the Eastit neighbours the region of Angoulême and the Massif Central foothills.

The landscape is formed by plains and small hills with smooth reliefs. The Charente river crosses the region, nourished by other streams: the Né, the Antenne, the Seugne rivers...

The production area covers the Charente-Maritime and most of the Charente departments, and several districts of the Dordogne and Deux-Sèvres. It has a homogenous and mild seaside climate. Annual average temperature in the area is of about 13ºC (55 ºF), and winters are normally mild. The Delimited Region has a total area of over one million hectares (1 095 119 ha), but the actual vineyards only occupy 79 636 ha. Approximately 95% of them are used for Cognac production

Based on the soil features described by the geologist Henri Coquand in 1860, 6 Cognac growing areas (Crus) were delimited and then ratified by decree in 1938: Champagnes (Grande and Petite Champagne), Borderies, and Bois (Fins Bois, Bons Bois, and Bois à Terroirs).

The Crus received their names when the local forests were cleared at the beginning of the 19th century. The Champagne and Borderies center growing areas are most productive.

It is rarely born of a single eau-de-vie or a single growing area, but generally from a blend of different ages and crus, sometimes up to a hundred of them. The blending, or 'marriage' is conducted under the watchful eye of the cellar master who upholds the brand's taste. In Cognac, he or she is a great alchemist of style. Each Cognac house guards its own secrets regarding the blending and assembling of eaux-de-vie fiercely. With a great deal of expertise, combined with intuition and method, the cellar master holds the key to this secret and transmits his know-how from generation to generation. He is responsible for the purchase of eaux-de-vie, he follows their elaboration until their maturity, decides their transfer from young to old wooden casks and oversees the blending. His role is essential in reaching the consistency of each product. Most large houses have hundreds of sources whose spirits they blend to achieve a constant taste. The final blend is made by the master blender who, as in armagnac, has four groups of permitted additives at his disposal.

Grande Champagne is planted with about 13 159 ha of vines used in the production of Cognac white wines. These wines produce fine, light Cognacs with a predominantly floral bouquet, requiring long ageing in casks to achieve full maturity.

Petite Champagne has 15 246 devoted to Cognac production. The resulting eaux-de-vie are very similar to those of Grande Champagne, but without their finesse.

The Borderies is the smallest of the six Crus. Its soil contains clay and flint stones resulting from the decomposition of limestone. Lying North-East of Cognac, its 3 987 ha of vines produce fine, round Cognacs, smooth and scented with an aroma of violets. They reach optimum quality after a shorter ageing period than Cognacs from the Grande and Petite Champagne.

Most of this area is covered by clayey, chalky soils known as «groies» very similar to those of the Champagne Crus, except for their red colour and hard stones from the Jurassic. Lying in a lower area known as the “Pays Bas” (Low Countries) north of Cognac, heavy clayey soils can also be found (60% clay). The Fins Bois surround the first three crus. Their 31 001 ha produce round, smooth Cognacs that age fairly quickly, with a bouquet that recalls the scent of freshly pressed grapes.

In the Bons bois crus, we find sandy soils on coastal locations, in certain valleys, and most especially in all the southern part of the vineyard. These are sands that have eroded from the Massif Central. Vines are quite dispersed, mixed with other crops, surrounded by forests of pine trees and chestnuts. The Bons Bois form a vast belt, of which 9 308 ha are destined to Cognac production.

This growing area has less of 1 101 ha of vines destined to Cognac white wine production. The soil, almost exclusively sandy, lies along the coast or on the islands of Ré or Oléron, producing fast-ageing eaux-de-vie with a characteristic maritime flavour.

(click on the map to discover the associated cognacs) 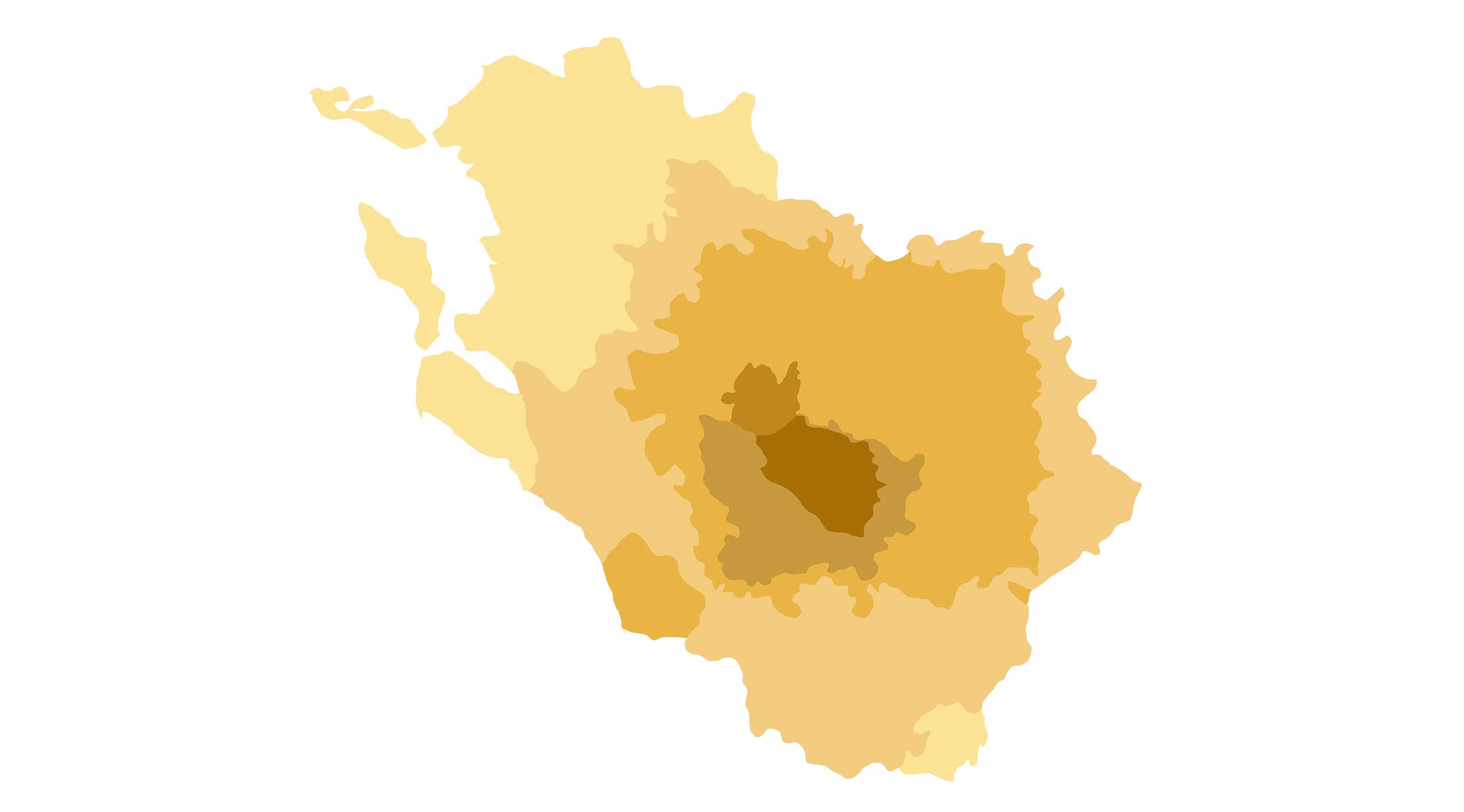